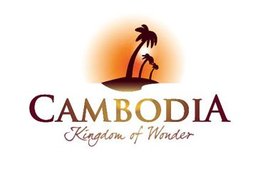 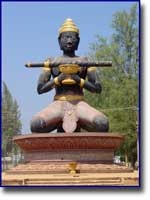 Unlike more touristed towns, the local economy is truly local - based firmly in rice, wood, sapphires and food crops - and is reflected in the character of the town. Similarly, as you leave Battambang by road, the scene quickly becomes one of small villages, rice paddies, and farmland, offering an excellent opportunity for the visitor to see a bit of 'unspoiled' rural Cambodia. The nearby countryside also harbors old pagodas, Angkorian era ruins, caves, waterfalls, and even Khmer Rouge period killing fields. Battambang means ‘disappearing stick’, and is named after a powerful stick used by a legendary Khmer king to achieve and maintain power in the Battambang area.
Battambang: What to See


Battambang City is absolutely full of wonderful colonial-era architecture and historic old pagodas, and the surrounding countryside harbors not only Angkorian-era temple ruins and pagodas but also offers some of the most picturesque rice paddy and village scenery in the country. The new edition of Ray Zepp’s essential guide to Battambang and the surrounding area, Around Battambang, is available at tourist hotels and restaurants throughout Battambang City. Zepp’s 164 page guide contains invaluable information on Battambang’s historic pagodas, Angkorian era temple ruins, surrounding countryside and local travel details. Highly recommended.

The bamboo train is a unique and creative form of ad-hoc local transportation. It consists of a small motorcycle engine-powered bamboo cart that rides the railroad rails picking up and dropping off passengers, cargo, animals, motorcycles along the way. When it meets on-coming train or bamboo train, it can be disassembled and taken off the rails in a minute or two, allowing the other to pass. Cambodia is currently in the process of upgrading its rail system. When the Battambang tracks are replaced, the Bamboo Train will likely come to an end. If you ever wanted to try the bamboo train, it’s now or never.

Located on Route #5 about 1km west of town.

Nary Kitchen is offering twice daily Cambodian cooking classes, morning and afternoon, taught by Ms. Nary. The class is about 2-1/2 hours and includes a market trip, preparing a single traditional Cambodian meal (recipe sheet included) and then enjoying the fruits of your labor for lunch or dinner.

The rural countryside outside of Battambang is National Geographic picturesque. Within just a few kilometers of town the countryside turns into small villages filled with stilted houses and rice paddies that stretch to the horizon. You’ll see plenty of countryside on the way to any of the local sites. Check out some of the local products in the making - rice paper, noodles and the fishpaste market. It’s all very traditional if not a bit unhygienic and smelly, but a interesting experience and adventure nonetheless. The roads are often rough and during the dry season. always exceptionally dusty. Bring a good hat and a krama to cover your nose and mouth.


Ek Phnom
Ek Phnom is an 11th century Angkorian-era ruin built as a Hindu temple under Suryavarman I. The temple consists of prasats on a platform with some carvings in pretty good condition. Wat Ek Phnom, a modern pagoda, sits next to the ruin. The river road drive to Ek Phnom from Battambang passes through small villages and rice paddies and is an absolutely beautiful countryside drive.

Phnom Banan
Phnom Banan is a mountain top, 11th century Angkorian-era ruin consisting of five prasats. Peaceful location with a nice view of the area. Also L’Ang But Meas cave. Very old (150 years+) active pagoda at the base of the mountain.

Both Battambang town and the surrounding countryside are replete with pagodas, some of them very old and highly respected. See Ray Zepp's book Around Battambang for complete information about visiting the local pagodas.

Phnom Sampeou Mountain, steeped in legend, and topped by Wat Sampeou and a group of caves used as ‘killing caves’ by the Khmer Rouge, containing the skeletal remains of their victims. The wat is unexceptional but the view is spectacular. Ask about the legend of Neang Rumsay Sok.

The Battambang Provincial Museum on the riverfront in the center of town houses a large collection of Angkorian and pre-Angkorian artifacts - statues, carvings, bits of ancient temples, pottery, etc. One of the best provincial museums. Hours: 8AM-11AM/2PM-5PM, make reservations for weekend visit and they will open the door for you. Admission: $1.


Phsar Nath in the center of town is the main phsar (traditional market) and is geared to the locals, sporting the usual variety of fruits, vegetables, meat, clothes, sundries, food stalls, etc. Gem dealers, a couple of banks, photo shops and moneychangers line the streets that ring the phsar. Phsar Leu, just south of town, seems to be the place to buy the local specialties: oranges and pomelos from Pursat province. The oranges are said to be the best oranges in the country.

BTB Souvenirs Shop Offering art and handicrafts by local artisans, Cambodian and from the Battambang area.

Located on Road 2.5 near the Market.


Chea Neang Drink Shop is a small convenience store on the west side of Phsar Nath, popular with foreigners and offering ice cream bars, cheeses, yogurt, wines, and other imported items.

On Road #2 near the White Rose.

Local goods Marble sculpture from Pursat province, woodcarvings from Battambang and sapphires from Pailin dominate the souvenir market in Battambang. Many of the hotels as well as the small souvenir/art/curios shops on Road #1 on the river in the center of town offer a selection of wood and marble products. The art shops have a better selection than the hotels and a couple have very interesting collections of curios, old trinkets, coins, antiques and oddities - well worth a look.

Cambodian sapphires and rubies mined in Pailin near the Thai border are brought to Battambang to be graded, cut and polished. There are some good deals on stones in Battambang but be very careful when buying. Fake and low quality jewel scams are common so you need to know gemology or know your gem dealer very well. Gem and gold dealers are located in the center of Psah Nath, in little shops surrounding the psah, and in a few shops on Road #1.